This slimming plan costs nearly 2,000 euros per week, but it is within the reach of anyone who has imagination and the desire to cook a little bit.

You want to lose weight, but you don't want to stop eating, let alone spend money on diet products or "miracle" pills of dubious reliability? Forget the 80/20 diet, the Atkins or ketogenic diet or the Dash. The ultimate diet for losing weight and maintaining a healthy diet is called Sirtfood and it is all the rage throughout the UK.

This diet has become famous thanks to social networks such as Instagram and promises to help you lose 7 pounds a week without eliminating certain hard to get rid of foods such as chocolate or red wine. In addition, it has been designed for some celebrities in one of London's biggest gyms where Madonna or Daniel Craig go.

Its creators, Aidan Goggins and Glen Matten, are nutritionists and the "culprits" for the fact that it has become fashionable and that celebrities such as Adele or Pippa Middleton put it into practice. These colleagues, who met at the University of Surrey, have developed a routine that you can sign up for for around 2,000 euros a week (about 1,400 pounds) and which is based on prioritising the consumption of foods that increase the activity of sirtuins, proteins that regulate various biological processes such as ageing, cell death, inflammation and metabolism, found in plant foods such as green tea, apples, citrus fruits, blueberries, kale, dark chocolate, parsley, olive oil, tofu or red wine. 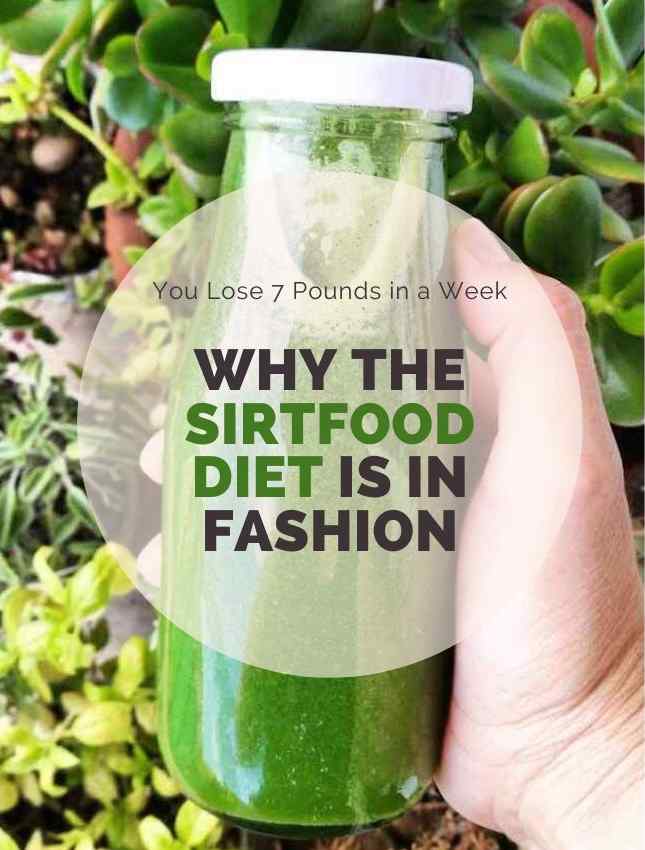 The foods it promotes are nutritionally interesting, but the initial shock phase is questioned.


According to researchers, these types of foods, called "sirtfoods", mimic the effects of fasting and exercise by increasing the rate of weight loss and reducing the impact of junk food. After testing their diet with 40 members of the prestigious gym, the authors were surprised by its effectiveness, as they all managed to lose about seven pounds in just one week.

"The original test was to stimulate rejuvenation and cell repair," the authors told The Times. "We had no idea that the weight loss would average ten pounds. Because calories were limited, we knew people would lose weight, but it was beyond our imagination.

Two phases of the sirtfood diet


1. The diet is divided into two parts: the first part lasts one week and consists of limiting the daily diet to 1000 calories per day (half of what is recommended for an adult) for three days by consuming three juices, consisting of leafy green vegetables, fruit and tea; and a main meal, which includes a turkey escalope with sage, capers and parsley, curried chicken with kale or fried shrimps with buckwheat noodles.

2. During the second week, the calorie intake increases with three meals a day and one of the juices. After a fortnight, the book only encourages you to maintain a diet with a high presence of these foods.

Although the original diet designed by these nutritionists was intended for high society clients, the foods promoted in it are not expensive at all. Perhaps to justify the very high price of the diet, the customers of the select gym were given a juice made with all the above-mentioned ingredients, rich in antioxidants, which is usually sold at a very high price.

This diet promises to make you lose seven pounds a week without eliminating chocolate or red wine.


But as Matten himself acknowledged in The Daly Mail, the hardest-to-find (and most expensive) lovage leaves can easily be replaced by celery leaves, and matcha tea varies enormously in price, and can be found for around 20 euros per 100 grams, expensive, yes, but not as much as the one used in the gym, which was almost a euro a gram.

The rest of the meals recommended in the book are neither exclusive nor surprising. They are essentially the foods that we all consider healthy at this stage: fruit, vegetables, lean meat, oily fish, wholegrain cereals, etc.


The method in question has found supporters and detractors among the experts. On the one hand, the foods it promotes are nutritionally interesting, but on the other hand, the initial shock phase is called into question. As the calorie intake is greatly reduced in the first few days, you actually lose weight. The problem is, as you know, radical weight loss is often unhealthy and does not last.

"At first glance, this is not a plan that I would advise my clients to follow. Having a goal of only 1,000 calories a day for three consecutive days is extremely difficult and I think people would be unable to achieve it," says Emer Delaney, a registered dietitian. "You don't just have to eat the fruits and vegetables on this list, you also have to vary," she adds.
Next Post Previous Post
diet,sirtfood diet,weight loss